We all have a story, and this one is from a snow camping trip into the Boundary Waters of Minnesota.

Some of us start as campers with tents, then graduate to pop up campers, and then to self contained RV’s and motor homes all the while dreaming dreams of having our very own cabin to get away from it all.

A cabin can be defined as a small house or shelter to get away from it all, that may be located in a remote or isolated area.

Then some start to realize that they can capture the magical and peaceful lifestyle enjoyed at the cabin and build or have built a tiny house that they can take wherever life takes them. For me, I enjoy a life of simplicity and the coziness of a small cabin or tiny house. And  that takes me to books, stories, adventures, and experiences. Here is one story from my past.

“It was a hot humid summer day as thoughts turned to winters brisk winds. Sitting idly around a table sipping iced tea, several members of my family thought of possibilities and methods to cool down. As a lark, it was suggested that a day of cross-country skiing would be enjoyable and cold. As talk turned to bravado, the webs were spun and before long we were planning an expedition into the Boundary Waters for a little cross-country skiing and snow camping in the following winter. January was to be the targeted month, and the third week as those were the days that it was at the coldest temperature of the winter As the day progressed into the evening we plotted, planned, made lists, and decided who was to take care of which tasks. Now, this was before I knew about personality traits along horoscope lines, and if I did, I would have been aware of potential issues. Lists and Pisceans do not mix well, and Pisceans have a tendency to loose a list as fast as they are given one. Pisceans are dreamers and visionaries. I am a Piscean.

Several times thru the fall, phone calls were made, to remind us of the deal struck on that hot, humid, sweltering July day. The total group consisted of 6, and as the days became shorter, the temperatures dropped, the group became smaller. People were dropping out as fast as ice cubes had melted on that July day. I was even having second thoughts.

The day of reckoning arrived, and the surviving three dreamers met up in Hudson, WS. We quickly double checked our lists, gathered up our gear, and headed north. The evening temps were hovering around 28, and it had just started snowing. As we miles ticked off, the snowfall became heavier, until at times the road became obscured. We hung our heads out the window to eye the side of the road, and no one was talking about turning back. We had struck a deal, and we were not going to be deterred from our goal. We laughed as we drove, and decided we needed coffee and lots of it. Around 2AM, we pulled into Duluth, MN and stopped for that much needed coffee. We were slightly behind schedule considering the slow going of the roads. We were headed for the Gunflint Trail out of Grand Marais, and our goal was to start cross-country skiing at the end of the trail to our campsite by early morning. We had a 5-6 hour ski trek to make before we hit the campsite.

As we drove old Hwy 61 along the North Shore of Lake Superior, we could hear thru the snowfall the pounding of the waves on the rocks below us. 61 followed the lake, and at points was a shear drop to the lake without any shoulders. The only thing that separated us from the drop was a cable guardrail.

Around 5AM we turned out of Grand Marais, heading west, and the snow was piling up, the snowflakes being as big as boxcars, and the pine bows were along the road were sagging heavily under the weight of the new snow. The picture was an awesome black and white image in the headlights. We often thought we were part of a picture as the trees slowly crept by. Just as the early twilight of the morning had brightened to the day, we arrived at the trails end and a cabin stacked high with snow. We talked for a while with the lone owner and then strapped on our skis and headed out. We snapped some pictures and left the camera in the truck for safety. The sound of the skis on the new fallen snow was the only sound that broke the silence. It was very much like a lovers whisper in ones ear in the middle of the night.

After a couple hours of skiing along the lake, we heard the sounds of wolves in pursuit of some prey. Looking thru the pines in the direction of the howls, we saw a lone deer running ahead of 4 wolves, with 1 in the lead running down the middle of the lake. The sight held us spell bound as we witnessed the wild of nature and we were without the camera!

After another couple of hours of skiing we found our campsite and set up camp, and as we unpacked our gear, we decided we were slightly hungry. We searched all of the backpacks and discovered that food had not made the lists! We had coffee, 2 giant chocolate bars, some nuts, some granola and of course, I had a book! We made our coffee and decided that we were okay. This was not planned as a long trek, just 48 hrs, and we could shorten it and head out the next day instead.

We built a fire, melted snow, and told stories as the snow fell around us. Finally around 10 we decided to bank the fire and head to the tents. We could see the stars and the moonlight on the moonlight on the snow, the air biting at our cheeks, the frost icing up on my beard created a snapshot in my mind for years to come. 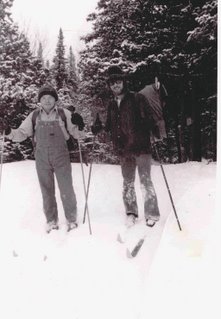 Around 2AM, I woke up, and thinking it was because I was cold, decided to do some isometrics in the sleeping bag to warm myself up. Then I heard what had woken me up. The sound was like a high-pitched scream in the night, and very much like a woman’s scream of terror. Now, I was awake, and so were Frank and Oscar. After some intense discussion we concluded it was the northern Lynx on the prowl.

The next morning dawned clear and cold. The snow was still falling, and we marveled at the sight. We had our coffee, ate some granola and nuts, and packed up our gear. By mid morning we were skiing across the frozen lake, making excellent time. By mid afternoon we reached the truck, stole the gear and drove to a restaurant in Grand Marais, where we ordered a large dinner to end the day.”

Below are some cabins and tiny houses in the season of December. Enjoy

View all posts by Jim →